The All Blacks have refused to get involved in the refereeing controversy that has enveloped their World Cup quarterfinal loss. But sometimes direct speech isn't needed to portray true feelings.


It's clear they are unhappy with the efforts of English whistleman Wayne Barnes but they are prepared to "take it on the chin".

Barnes has been under siege from New Zealanders since he allowed a forward pass in France's deciding try that helped them to a 20-18 win in Cardiff.

Fans have been irate on radio talkback and the internet and even New Zealand Rugby Union boss Jock Hobbs entered the fray, labelling Barnes' refereeing as "questionable".

But you won't hear the All Blacks moaning. Not publicly anyway.

"Part of our dignity and part of our composure and part of our ability to do it on the world stage and be respected is to make sure that we don't bitch and moan," said All Blacks coach Graham Henry.

"That's not our job. That's not Richie's job or my job or anyone else's job at the top table. I think other people are doing that for us and that's the way it should be.

"I think if we came out in the press and started moaning about things in the game I don't think this country would be respected for it. I think the Prime Minister has said that as well and I would agree with her on this occasion.

But in a lengthy opening speech to a large media contingent on hand in Christchurch for the All Blacks' arrival home, Henry did concede that "we didn't get the bounce of the ball in the game and I think that has been well talked about."

RugbyHeaven noted to Henry that United States coach and former All Blacks selector Peter Thorburn had suggested at that at a pre-World Cup meeting in Paris coaches and captains had been informed that touch judges would have a lesser role in proceedings for things like forward passes and crooked lineout throws.

Was that correct, we asked.

"Touch judges were depowered," said Henry. "But I think they were asked not to keep interfering all the time. With obvious transgressions of the rules they were asked to interfere. Mainly that was on foul play to be fair.

"But a blatant forward pass should be called by a line umpire."

RugbyHeaven then asked Henry if he saw a forward pass in the quarter-final?

"Did you?" he replied

"Then why are you asking me?" said Henry.

"Because you're the coach."

"I have two good eyes like you, Duncan," was Henry's final say before forwards coach Steve Hansen interrupted.

"There's no use asking that question," said Hansen. "Graham has already told you we aren't going to answer it. We are trying to accept this defeat with a whole lot of humbleness and dignity and he has pointed out for you that as a team, we will take it on the chin.

"But you saw the game - you report what you saw, that's fine. But don't ask us to moan about something that we don't have control of because it's not fair.

"We are hurting enough now, so we don't need to get into a battle with you guys. We are just trying to be honest with you. We don't want to get into a fight."

Henry said that in all of the fuss over the All Blacks' shock exit, their opposition shouldn't be forgotten.

"The biggest thing we need to say is the French played very well," he said.

"This country needs to acknowledge the strength of the opposition and the way they played otherwise it will be seen as sour grapes.

"There was some talk of other things in the game but we need to acknowledge how well the French played. We have played them a lot in recent years but they played a lot better than they have done in the previous games."
Top 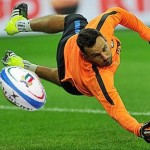